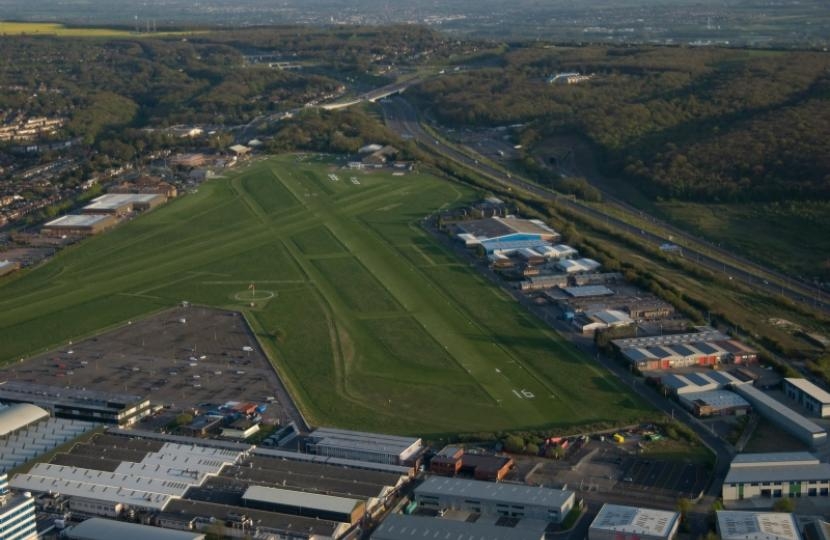 Rochester and Strood MP Kelly Tolhurst has backed Rochester Airport to praise its positive contribution to Medway and prospects for an encouraging future.

Rochester Airport has a proud aviation history and currently boasts a successful flying club, an RAF air cadets squadron, Kent Air Ambulance and is home to excellent skills and technology at the likes of BAE Systems and Aeromet. Over its many years, Rochester Airport has become integral to the development of Medway and as part of the North Kent Enterprise Zone will soon become a creator of high quality technology jobs and apprenticeships.

Rochester Airport dates back to 1933 shortly before the Short brothers took over the site to develop some of their famous flying boat productions. The name "Empire" and "Sunderland" flying boats will always remain one of the important contribution made by Medway to British Aviation.

Kelly is also a member of the All-Party Parliamentary Group (APPG) on General Aviation which intends to fight for the £3bn General Aviation sector that has created 38,000 jobs, inspires young people to participate in STEM, and which directly supports UK military, industry and commerce. It will aim to promote the interests of general aviation at all levels of government and business, and to protect further airfields from closure and re-development as brownfield sites.

The APPG is set to visit the airport in the coming months and double its backing in parliament and government. Last year, Carol Vorderman also joined the group to offer her support for small airports. Carol is an air cadets ambassador and owns and flies her own light aircraft, previously using Thanet as a base.

“I am proud to fight for the future of Rochester Airport which has been a part of Medway for generations and has consistently contributed our economy, skills and culture, and is now home to great business and our fantastic air cadets.

“Our Airport has delivered so much to Medway over decades, and it is in our interest to see it flourish and grow so that future generations can enjoy it too. I am delighted to be a part of the APPG on General Aviation in order to fight for the future of these types of airports

“I am confident that there is an exciting future for communities and airfields like Rochester up and down the country provided we offer the necessary support and investment it deserves.”

Like so many, Medway has been my home since birth and I expect to carry on living here for many years to come. That is why I want our Local Plan to be visionary and ensure our towns become prosperous and continue to be wonderful places to call home.