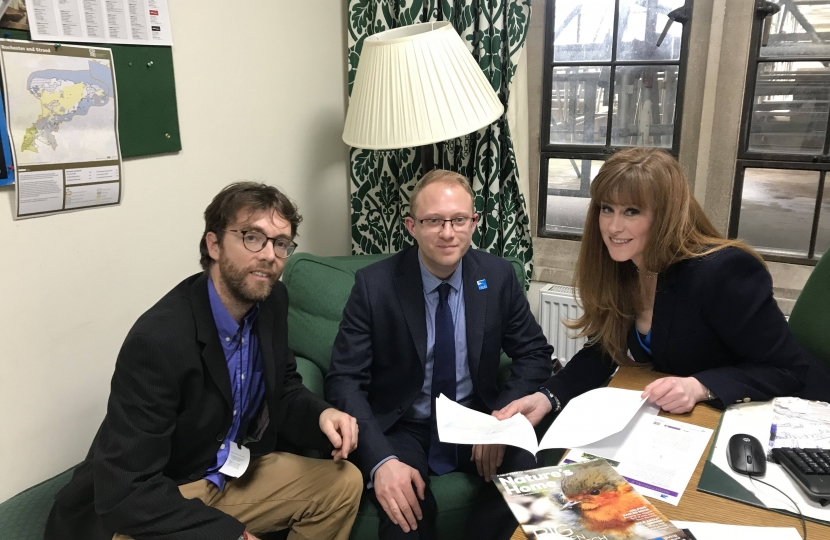 On the day Medway Council Cabinet met to approve the next stage of the Local Plan process I met with the RSPB to discuss the Council’s latest draft Plan and its severe implications for the Peninsula, including Lodge Hill and Deangate.

As a lifelong Rochester & Strood resident, it is very saddening that these important community spaces will change, as we have yet to have a strategic plan for growth in Medway and many questions remain unanswered for these proposals. During my time as MP I have actively campaigned for a vison and a strategic plan for the delivery of infrastructure that is so desperately needed to support these developments.

I have continuously offered evidence and suggestions, lobbied and challenged the Council to do the sustainability work around infrastructure for the towns. But the past three years have been increasingly frustrating having held countless meetings and dialogues with councillors and officers on behalf of residents across the Peninsula, which have sadly not been heard, instead favouring the protection of capstone valley.

For almost three years, since being elected I have been fighting against the huge housing target imposed on our community, particularly surrounding the threat of development across the Peninsula. Now that this figure has risen again to over 38,000 makes the need to object to damaging proposals that threaten our valuable green space even more important. In addition, following yesterday's Government planning announcement, I have again written to the Secretary of State for Housing objecting against these numbers.

The proposed plans for the Peninsula would change it beyond recognition. The proposals will see large parts of our green space disappear, coupled with a lack of detail around the delivery of vital services such as schools, GPs and transport which I have been calling for since 2015. But, fundamentally, that so much of this housing will fall around Hoo brings great worry and pressures to those local people and on its struggling public services.

We all accept housing is needed, but it has to be right, sustainable and reflect a real vision for Medway’s future success. As we move forward towards the next consultation later this month, I urge all residents across Medway to engage in this process. I will be continuing to campaign strongly to ensure that the Peninsula’s SSSI is protected and that unstainable development, and unrealistic housing numbers, is challenged without the delivery of real infrastructure and economic planning necessary for Medway’s residents.