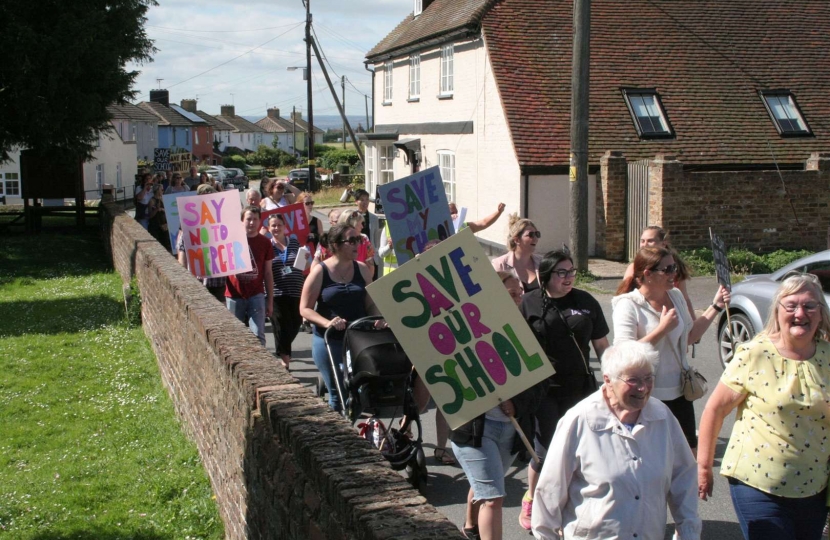 After a long fought campaign, the MP for Rochester and Strood is delighted to have been informed that the Minister for Academies, Lord Agnew, has declined a proposal to merge Stoke Primary School with Allhallows Primary School and it has been confirmed that the school will now remain open in September.

Kelly has been in full support of the community-led campaign to keep Stoke Primary School open. The MP had organised meetings with the Regional Schools Commissioner, Jonathan Duff, and had conversations with Lord Agnew to discuss the concerns about the proposed merger. A member of Kelly’s  parliamentary team had also attended a protest walk with parents on the 1st July 2019 to highlight how dangerous the journey from Stoke to Allhallows is on foot.

Kelly said: “I am delighted that the Minister has declined this proposal and that he understands the devastating impact which the closure of Stoke Primary School would have on our rural villages.”

“Common sense has prevailed and I thank Lord Agnew for agreeing with our concerns, this has only been achieved because of the hard work of the local community in Stoke, the Save Our Stoke School campaign team, and also Cllr Phil Filmer who has worked with me to stop this proposal in its tracks.”

“Lord Agnew understood and also shared our concerns about the proposed merger of the schools. However what we must realise is that to keep our schools open, as a community we must support them by sending our children to them, and working with Leigh Academies trust, in order to improve educational attainment for our village schools to become sustainable for the future. I have committed to work with the community on this”

Chancellor Sets out Budget to Level up Economy and Tackle Coronavirus

Today’s Budget has set out the Government’s economic plans for the next year, delivering on our manifesto promises and protecting the UK economy.  There are six key parts: