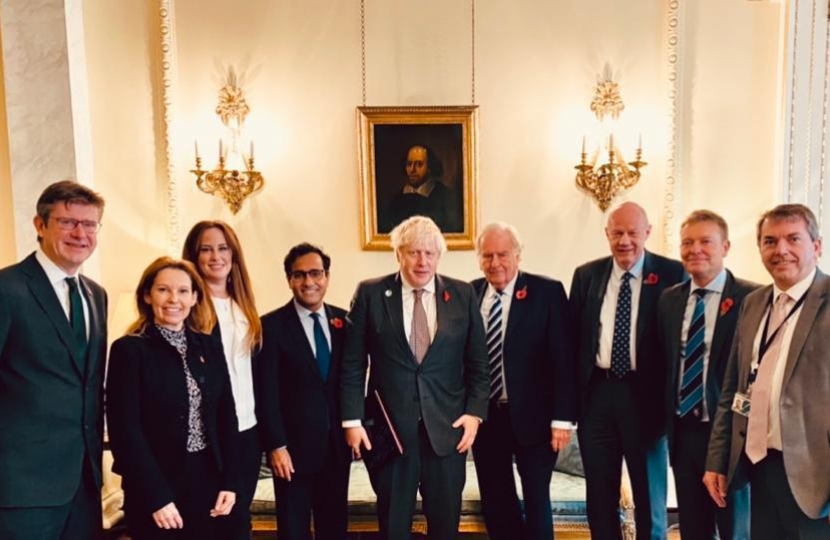 The MP for Rochester and Strood, Kelly Tolhurst MP and Rehman Chishti MP joined fellow Kent MPs for a meeting with the Prime Minister Boris Johnson to raise important issues such as development, healthcare, and migration.

Kelly used this opportunity to speak with the Prime Minister directly about key issues impacting Rochester and Strood right now; particularly Medway’s Local Plan for future housing development. Along with the local community, Kelly has strongly objected to the Medway housing targets which would see Medway build 1,662 new homes each year throughout the life of the Local Plan. Kelly made it clear to the Prime Minister that the calculation, which is set by central government, was ‘flawed and excessive for Medway’.

According to Medway’s draft Local Plan, the vast majority of all development is due to take place within the Rochester and Strood constituency – Kelly has always been concerned that her constituency has taken its fair share of development in recent times with Rochester and Strood accounting for over 2,000 new-build home sales over the past 10 years. With the rest of Medway having seen considerably less new-build sales when compared against the latest statistics. These concerns were fed to the Prime Minister and Kelly also highlighted the extent of the housing planned for the Hoo Peninsula which the Prime Minister took on board.

As previously announced, along with her MP colleagues in North Kent, Kelly is calling for an additional hospital site. Kelly explained to the Prime Minister that greater support is required for our local health services, and specifically the need for a new hospital in this part of the country.

Finally, the group of Kent MPs also discussed concerns about migrant crossings on the Kent coast and Kelly was pleased to hear that the Prime Minister and Home Secretary were determined to get this issue dealt with.

Kelly said: “I was pleased to be able to raise these issues at the highest level and am encouraged that the Prime Minister understood my concerns. I will continue to follow up on these matters with the Government.”