Kelly Tolhurst MP secures commitment from Boris Johnson that “Boris Island” or a Hoo peninsula Airport is OFF the table. 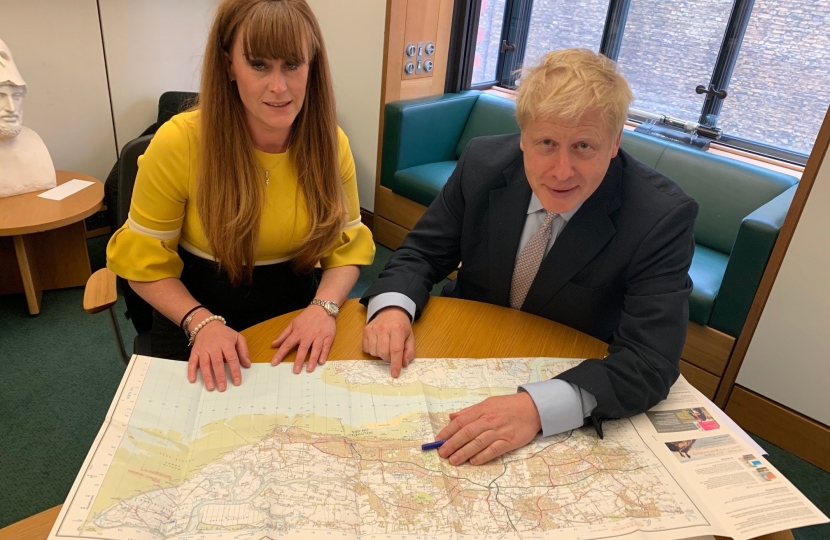 Rochester and Strood MP, Kelly Tolhurst, has secured a commitment from Boris Johnson that the Thames Estuary Airport or a Hoo Peninsula Airport are OFF the table if he becomes Prime Minister next month.

This week, after growing support for Boris Johnson to become the next Prime Minister, the Member of Parliament for Rochester and Strood joined forces with James Duddridge MP for Rochford and Southend, both MPs have continuously opposed an Airport in the Thames Estuary which would be detrimental to both Kent and Essex communities.

Residents in Rochester and Strood, particularly on the Hoo Peninsula will be pleased to hear that at a meeting this week, Boris Johnson gave his commitment directly to Kelly, that he would not be progressing the idea of an Estuary Airport as an alternative to Heathrow expansion, neither in the River Thames nor on the Isle of Grain – the idea which was first floated when he was Mayor of London.

Kelly Tolhurst MP said: “We have fought for years against the threat of an Airport which would destroy our constituency, the lives of people living here and the exceptional habitat and wildlife which is of national and international significance on the peninsula. I welcome his commitment, and hope that this will finally lift the blight felt by residents, from the threat which has hung over us for years”

A spokesman for Mr Johnson said: “Plans for a Thames Estuary Airport are off the agenda”

At the meeting this week, Kelly also spoke to Boris about Medway Council’s Rochester Airport project, which secures the long term future of the light aircraft airport and is now home to the Kent Air Ambulance. Plans for the development set to create over a 1000 jobs has now been given the green light by the Council’s planning department. The All-Party Parliamentary Group for General Aviation, led by Rt Hon Grant Shapps MP, visited the Airport in December to add their support for the protection of the site as a small airfield and this week Rochester Airport’s vision for a new all-weather runway got Boris’s backing.

Boris Johnson said: “I support Kelly’s popular local campaign to bring jobs and prosperity to her constituency by getting an all-weather runway at Rochester Airport.”