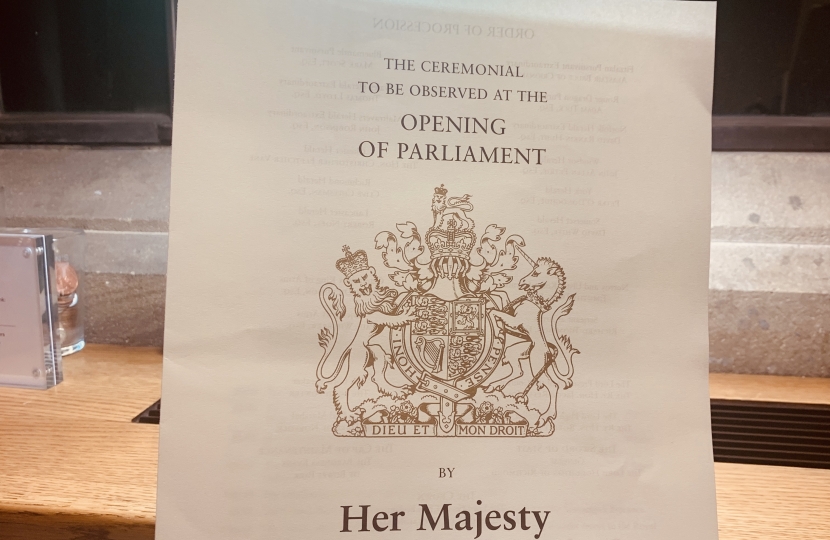 Yesterday, Her Majesty The Queen opened a new session of Parliament and laid out the Government’s ambitious positive domestic agenda for the year ahead. Focused on our clear priorities of getting Brexit done, investing in our NHS, tackling violent crime, and dealing with the cost of living.

By getting Brexit done, we will end the uncertainty and get on with an ambitious programme to build a brighter future for everyone in this country.

The Queen’s Speech began clearly laying out that the Government are committed and working hard to leave the EU on the 31st October with a good deal in place, and this was reaffirmed.

Other important pledges were included in this year’s speech, which focused on the issues which are of great importance to my constituents: protecting our environment, investing in new transport infrastructure, and strengthening our NHS. This extends to putting into law substantive proposals to fix the crisis in adult social care, giving people the dignity and security, they deserve. But also, to modernise and reform the Mental Health Act.

New laws to empower police officers to immediately arrest someone they know is wanted for a serious crime committed in a trusted country, without having to apply to a court for a warrant first. A police protection bill that will support the Police and strengthening support for victims.

A Pension Schemes Bill will enable people to plan for later life by giving them access to information on their pensions’ savings in one place online whilst improving protections for pensions.

On the environment, I am pleased that measures will be introduced to improve air and water quality and that tougher action will be taken on plastic pollution. The Animal Welfare Bill, which will increase the maximum jail sentence for animal abusers, will also be returning to this Parliamentary session so that it can be enshrined in law.

A commitment to making sure that every child is provided with a world class education. Reiterating our commitment to levelling up opportunities and investment in the regions across England

This comes in addition to ambitious plans to strengthen our digital, transport and energy infrastructure, through the National Infrastructure Strategy, which will also address the critical challenges posed by climate change and build on our commitment to achieve net zero emissions by 2050. I am proud of the fact that this Conservative Government is the first major economy to commit to Net Zero.

Also, our commitment to deliver on the Good Work Plan, ensuring that our employment practices keep pace with modern ways of working and productivity is enhanced.

I will be making sure Rochester and Strood gets its fair share of any additional investment that comes as a result of these measures.

I was also extremely pleased that the Domestic Abuse Bill will return to Parliament as part of our upgrade of criminal justice.