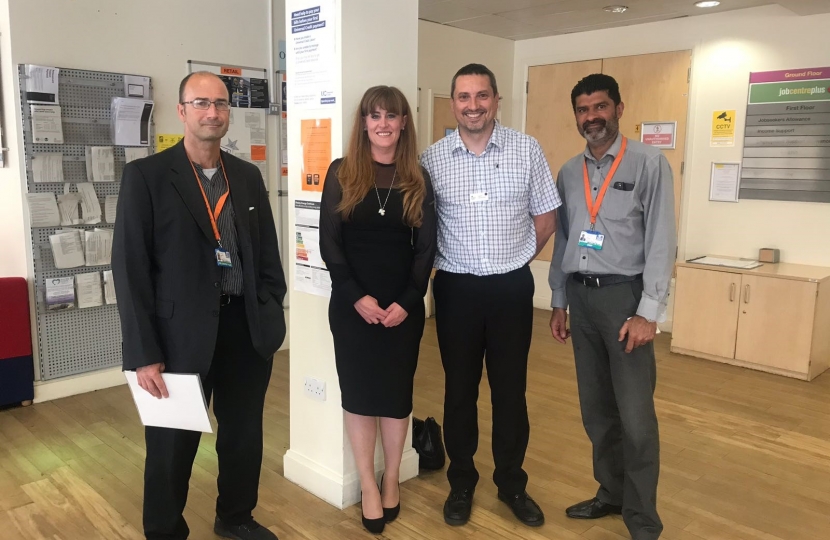 Kelly Tolhurst MP has welcomed this month’s figures showing that local out of work claimants have fallen once again, meaning that more families across Rochester and Strood have the security of a regular pay packet.

In Rochester and Strood, the number of people claiming the key out of work benefits has fallen to 2.1%, below the national average of 2.8%. This also represents a decrease of 90 people claiming since May alone and includes a further reduction in claimants aged 18-24. Kelly recently visited Chatham Jobcentre to congratulate staff on the continuing fall of claims and on the successful rollout of Universal Credit in Medway.

With the employment rate at a record high, the female employment rate at its highest since records began and the proportion of young people who have left full-time education and are unemployed at its lowest ever rate, it shows the government’s economic and employment policies continue to work.

On the welcome news, Kelly said:

“It is extremely welcoming that the number of local people relying on out of work benefits has fallen again thanks to the hard work of Chatham Jobcentre and the local economy, meaning a significant number of people are now able to enjoy the fruits and independence we wish for in life.

“This is also testament to the hard work of local businesses which continue to grow, employ and develop skills, all of which helps boost our national and local economies and drive our towns forwards.

“Our job now is to build on this success story and create an economy that works for everyone, so Rochester and Strood’s residents can benefit from the opportunities that are being created regardless of who they are or where they live.”