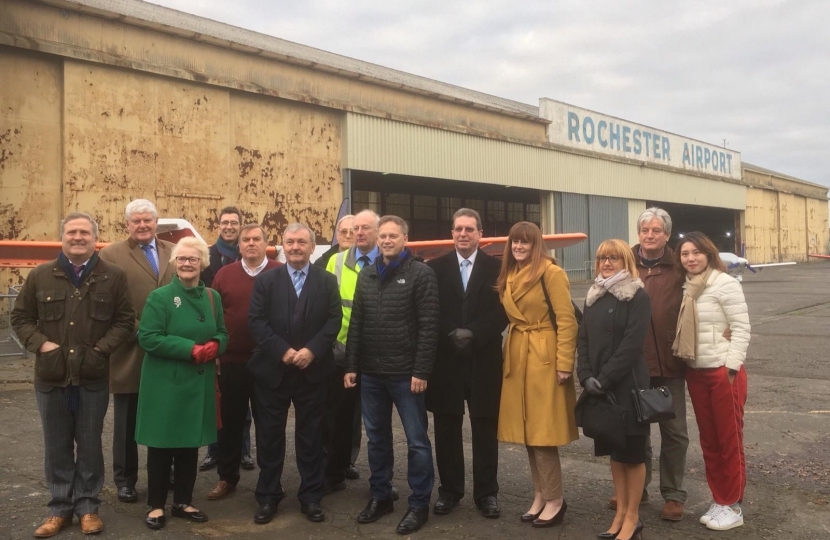 In December, Rochester and Strood MP Kelly Tolhurst was pleased to host a visit of the All Party Parliamentary Group (APPG) for General Aviation at Rochester Airport, along with local Rochester South & Horsted councillors and the airport’s management, Dick Searle, Kelvin Carr and Paul Britten.

The APPG’s work focuses on how to save and support the UK’s small airfields, such as Rochester and Manston, and calls on the government to protect and enhance these sites. It aims to inspire both current and future generations to take up the science, technology, engineering and mathematics around aviation, thereby creating high-tech jobs and growth in all nations and regions of our economy. This is also an ambition for the future of Rochester Airport.

Rochester Airport has submitted two planning applications for upgrades, including some of the new aspects such as a new control tower, hub building, and family viewing area. The airport’s upgrades will also pave the way for Medway Council’s Innovation Park Medway project, which aims to bring more businesses to the area.

The Airport’s upgrades have been held up by a number of delays in the planning process, including minor objections from small numbers of local residents and Highways England. However the plans are now moving forwards with the application for the relocation of the helipads being approved, while the rest of the upgrades are expected to progress soon after.

The successful visit included a tour for the APPG’s representatives and chairman, the Rt Hon Grant Shapps MP, of the Airport’s main assets, such as the Medway Aircraft Preservation Society, Kent, Surrey and Sussex Air Ambulance Trust and the Garage Museum. This was followed by a discussion with the airport’s management and Medway Council on the site’s future and what support could be given.

“It was fantastic to invite and guide the APPG for General Aviation around our excellent airport and its facilities, and to show what great plans we have for its future for the benefit of local residents and businesses.

“I am proud to fight for the future of Rochester Airport which has been a part of Medway for generations and has consistently contributed our economy, skills and culture, and is now home to great business, the Kent, Surrey and Sussex Air Ambulance and our fantastic air cadets.

“Our Airport has delivered so much to Medway over decades, and it is in our interest to see it flourish and grow so that future generations can enjoy it too. I am delighted to work with the APPG for General Aviation in order to fight for the future of these types of airports.

“I am confident that there is an exciting future for Rochester Airport and I am determined to help Kelvin, Dick and Paul to ensure their visionary plan for the site is given the support it deserves.”